CHIROPRACTIC HELP FOR RUNNERS IN Pasadena

Are you a runner? Running injuries have been seen in everyone from the occasional recreational runner to the most advanced professional athletes.  Chiropractic care for runners in Pasadena may be able to help.

If you have developed a recent running related injury or have been unfortunate enough to suffer from one for many years, don't worry because you're not alone. It has been found through numerous studies and surveys that approximately 72% of people involved in running will incur some sort of injury throughout their career. With such high rates of people developing running related injuries, it's no surprise that they can occur in almost everyone. However, some people are more prone than others.

Some common causes of running trauma include; running on an uneven surface, poor running shoes, inadequate training or preparation, and running on steep hills. In addition to all of these contributors, there is one thing many of these people have in common, misalignments in their joints, primarily their backs. Through this article, Braun Chiropractic will educate you on some of the most common injuries due to these misalignments and what the best line of treatment is for you.

Since running produces added and abnormal stress to many joints in the body including; the feet, knees, hips, and back, it should be no surprise that a vast number of different injuries may occur. However, some injuries have been found to be more common than others. The following is a list and short description of some of the most commonly seen running related injuries seen at Braun Chiropractic.

Stress fractures are a common cause of pain that can be found anywhere from the foot to the lower leg. In fact, it is estimated that stress fractures are responsible for up to as much as 15% of pain in runners. Stress fractures typically begin from muscles that are not functioning properly. In one instance, the muscle may be weak causing an increased stress load on a particular bone. On the other hand, the muscle may have been overworked from activities, such as extensive running, causing the muscle to pull hard on the bone. The question then becomes, why is there an imbalance in the muscles in the first place. Usually, this results from bones that are out of place in the back. These misalignments cause nerve interference that results in the wrong signal reaching the muscle. Our Braun Chiropractic has the appropriate equipment to make a proper diagnosis as to the cause of the stress fracture and then to also recommend the best treatment.

To understand achilles tendonitis, it is first important to understand what the achilles tendon is. The achilles tendon is one of the strongest structures in the body, connecting the calf musculature to the heel of the foot. Through this design, a person is able to lift and move the foot in activities such as running. Tendonitis is a fancy term that basically means inflammation. If the muscles in the calf are weakened or not functioning properly, activities such as jogging and running can cause increased stress to the tendon causing it to be overworked and swell. When this occurs, people typically experience pain near the heel, swelling around the ankle, and limited flexibility of the joint. Typically, the pain is worse at the beginning of exercise and lessens throughout the workout. As with stress fractures, achilles tendonitis has been found to be caused primarily by "subluxations" or misalignments in the back causing abnormal signals to be sent to the muscles in the calf. Throughout this mechanism, the tendon is often overworked and results in this condition.

If you are experiencing pain throughout your lower leg, specifically the shin region, and have just begun an intense workout following a long period of rest, there's a good chance your suffering from shin splints. Shin splints typically begin at any age and are most commonly associated with individuals who try to overdo it during their initial training phase. Typically, shin splints are first noticed as a dull/achy sensation throughout the front of the lower leg.  Overtime, swelling below the knee may accompany this pain. While sudden extreme exercise, poor shoes, and flat feet can contribute to its development, abnormal nervous system function has been found to often be the most common cause. Our doctors at Braun Chiropractic are trained to restore proper nervous system function and as a result provide relief from shin splints.

As the name implies, runners knee is most common to runners. However, the term is more general than you would think and the condition can develop in anyone who overworks the knee joint. The most common initial symptom of runners knee is a dull/achy sensation that develops around the knee. Typically, the pain is most severe during activities that involve bending and twisting of the leg. There are many causes that contribute to its development in runners, but direct trauma, overuse, improper function of the thigh musculature, and misalignments of the knee joint are the most common. There is a widely held misconception that chiropractors only deal with treating the spine. While this is our primary focus, our Braun Chiropractic doctors are also highly skilled at correcting misalignments in the knee. Through this form of treatment, many patients have experienced relief from runners knee.

To get a grasp of what plantar fasciitis is, it is important to understand what the plantar fascia is. The plantar fascia is one of the strongest structures in the body and is fastened from the heel to the pads of your feet. This structure adds to the stability of your foot and helps you maintain the proper arch. Running places an intense stress to the structure and often results in the pain that is attributed to plantar fasciitis. Some common causes of plantar fasciitis have been found to be a sudden increase in activity, such as running that overworks the structure, use of poor running shoes, running on particularly hard surfaces, and misalignments of the bones in the feet often resulting in "flat feet". The pain associated with plantar fasciitis is often described as sharp and intense and is often the worst during the first few steps after awakening in the morning. It's important to understand that the sooner the treatment the better. Anti-inflammatories, cortisone shots, and braces have been found to be effective for short-term symptomatic relief. However, adjustments aimed at realigning the bones in the foot have been found to be the best for long term lasting relief. Our doctors at Braun Chiropractic have witnessed the success of these adjustments.

One of the most painful injuries associated with running is ilio-tibial band syndrome or IT band syndrome for short. The IT band is a long connective tissue structure that extends from the hip to the knee. Therefore, pain and other related symptoms can present anywhere along its path. The IT band is extremely important for the stabilization of the knee joint, so abnormalities of this structure have been shown to contribute to knee injuries. In addition, that is why damage of the IT band is often misunderstood as a knee injury. The most common symptoms of ilio-tibial band syndrome are pain and inflammation along the outside of the leg. These symptoms may be felt during running and even after activity has ended. Since this structure involves everything from the hip to the knee, a complete study and examination of the leg is necessitated. Any abnormal alignment along its path may be the underlying cause. A substantial number of cases have been attributed to misalignments of the vertebrae in our spine. As mentioned previously, these abnormalities can be a direct cause of nervous system interference, producing the symptoms associated with ilio-tibial band syndrome.

As you can see many of the injures, and their resultant symptoms, are associated with underlying misalignments of their respective joints and often the back. Chiropractors are one of the few professionals who are trained at addressing the entire bodily system. Since running puts an additional stress on the body's structure, it is even more important for these athletes to see a chiropractor, preferably before the symptoms begin.

If you believe that you are developing any of the previously stated conditions, contact our Braun Chiropractic in Pasadena as soon as possible for a complete evaluation. 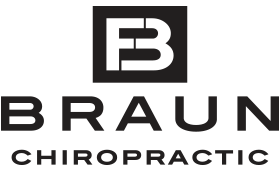